If you follow my blog, you know I often share something ‘off topic’ that truly captivates me.

This is one of those times, though the word captivating is an understatement.

(Gives new meaning to that brilliant song, “Ring of Fire”) 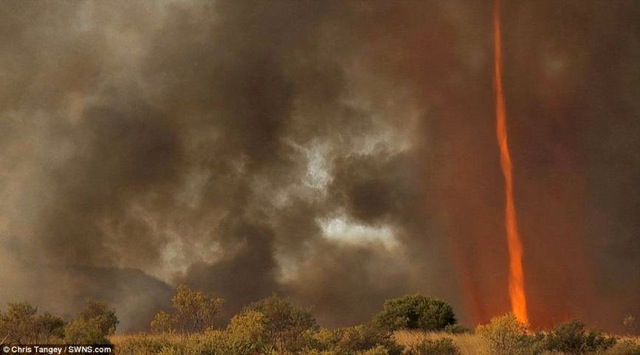 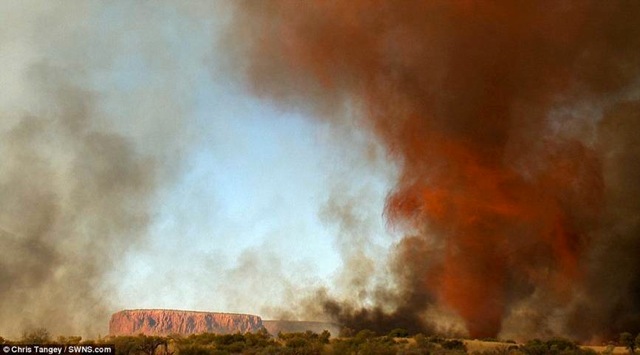 A 30-metre high tornado of FIRE whirled around Australian outback for a terrifying 40 minutes. Fire tornadoes occur when a column of warm, rising air contacts with – or creates – fire on the ground. An astonished filmmaker is coming to grips with the moment he witnessed one of nature’s rarest phenomenon – a tornado comprised entirely of fire- and lived to tell the tale. Chris Tangey had been out in Alice Springs, Australia, scouting locations for a new movie. After finishing the task, he went over to help workers at a cattle station when he was confronted by one of nature’s most intimidating spectacles.

At the time, he was 300-metres away from the 30-metre high fire swirl which ‘sounded like a fighter jet’ despite there being no wind in the area!

The 52-year-old said: “The weather was perfectly still and it was about 25 degrees Celsius – it was an entirely uneventful day.  Then the next thing a man is yelling ‘what the hell is that?’ and I turned around and saw a 30-metre fire tornado. I was about 300-metres away and there was no wind but the tornado sounded like a fighter jet. My jaw just dropped.”

Mr. Tangey, who runs Alice Springs Film and Television, in central Australia, described it as a ‘once in ten lifetimes experience’.

Thankfully the fire tornado occurred in the remote Australian outback and no injuries were reported. He added: “I’ve been shooting in the outback for 23 years and I have never seen anything like it. We’ve heard about them but they’re never seen. If I had known what was about to happen then I would have happily paid $1,000 to watch it. At any time there were three different tornadoes, it just kept going and going for 40 minutes. The whole experience was staggering and the length and variety were astonishing.”