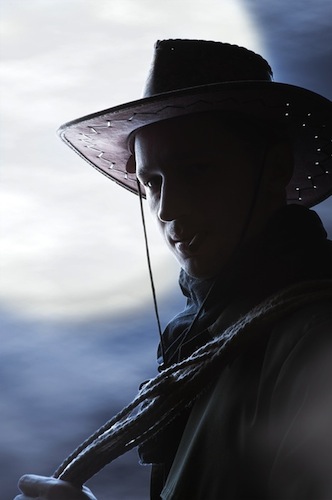 Facing a long drive, this cowboy decides to nip some naughty behavior in the proverbial bud.

Expertly be brought the van to a smooth finish, and unbuckled his seat belt.
“What are you doing?” she demanded.
“Comin’ around to your side to help you out,” he replied.  “You stay Mickey,” he said to his dog, who yawned in response.
As she watched him move around the front of the van, a flurry of butterflies sprang to life in her stomach, and proceeded to flutter around furiously.
What the hell is he doing?  He couldn’t be thinking…
Before she could finish the thought, her door was pulled open and his fingers had pushed the release button of her seat belt.
“I figure we’d best get this over with now.  It’s inevitable,” he proclaimed, and to her utter shock, he deftly pulled her forward landing her over his shoulder.
“What the hell?  Put me down you asshole,” she shrieked.
“Keep yellin’ like that and you’ll spook your horses,” he warned.
To her immense irritation she realized he was right, and while she stopped squealing, she continued pounding and kicking, but without shrieking she found it annoyingly frustrating.
“Don’t wanna wait until we’re rollin’ along the interstate,” he declared, sitting himself on a large log he’d spied laying a short distance from the van.  “You’ve had this comin’ from the moment I arrived.”
“Dammit, stop!” she squealed, as he jerked her over his lap.
“The more you wriggle and give me trouble, the harder I’m gonna spank you, so how sore your butt will be is up to you,” he declared, slapping his hand down.
“SHIT, THAT HURT!” she yelled.
“Pretty damn sore then,” he replied, and with a practiced rhythm, landed his flattened palm across her seat with rapid-fire swats.
“Stop, stop,” she squealed.  “I didn’t do anything.”
“I guess I’ll just have to keep whippin’ your butt.  At some point you’ll start sayin’ your sorry.”
“For what?” she wailed, as his hand continued to rise and fall.
“Let’s see, bein’ rude, not sayin’ thank you for me turnin’ around and comin’ to help you, not sayin’ thank you for loadin’ your difficult mare, not bein’ happy for a guy whose havin’ his first baby-”
“Okay, okay, you’re right,” she howled, wriggling and squirming, trying to gyrate her bottom away from his spanking hand.
“Nope, I think you’re just sayin’ that.  I don’t think you’re sorry at all!”
“I am, really,” she cried.  “I get it, I get it.  I know I’ve been a bitch.  I just don’t know why.”
Abruptly, miraculously, it stopped.
“Yep, you have, and now you know that don’t fly, right?” he asked, slapping to underscore his words.
“Riiight!” she cried.  “I’m really sorry.”
The hand that had been tightly holding her waist, and the leg that had draped itself over her thighs, fell away.
“Stand up.”
Unsteadily she rose to her feet, immediately placing her hands on her scorched cheeks.
“If you don’t start actin’ like the sweet girl I know you can be, if you give me reason to whip your ass again, you won’t have those jeans to protect you,” he warned. “You get my drift?”
“Yes,” she whimpered, and her face, already red, turned an ever deeper crimson at the thought of him baring her backside.
“Good. Now let’s hit the road and have a nice drive.  No more of your brattiness.”
He stood up, taking her by the hand, and as his fingers curled around hers, she felt a rush of something she didn’t recognize, like a warm wave washing over her.
Shit, this is weird?  I feel like I just want him to hold me…and hold me…and…this is just weird.