Since the release of my sequel to Deja Vu – An Eternal Flame – I have received a number of intriguing emails from those who believe they are in a relationship with their Soulmate;  a person they are convinced they loved in a former life. 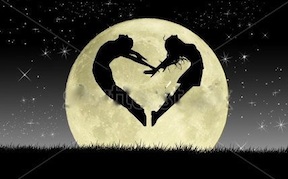 Is that what a Soulmate is?  A person we have loved before?  Or is it someone that draws out the best in us, supports, nurtures and loves us, and allows us the freedom to be exactly who we are?

She was only nineteen when she first saw him.  She was in a stark, sterile office,  sitting on a hard bench in the reception area.  He walked past, barely glancing her way, and as she looked up at him – a complete stranger – her heart jumped.

She didn’t know quite know what was happening.  The bench was cold and uncomfortable but all such thought disappeared as she found herself silently praying he would walk past her again.

He did.  This time, as his footfalls announced his approach,  she had to cast her eyes down for fear he would spy the deep, red flush that had mysteriously crossed her face.

Over time she came to know him, and for many years secretly thought of him, wondered about him, and held her strange, unfathomable crush deep in her heart, known only to herself.

Then, one day, magically, they went on a date – then another – and another…

For months he was everything she had wished for, hoped for, dreamed of.

He spanked her, bound her, teased her, kept her waiting and wanting, kneeling in sublime submission.

Then he was gone.

Is a Soulmate a forever lover?  Or can a Soulmate sweep into one’s life – connect with an overwhelming, overpowering force – then disappear?

We don’t have the answers, but when I was writing An Eternal Flame I had flashes of understanding; a deeper comprehension of the inexplicable bond between souls reunited, souls who are truly bound through time.

It is a mysterious, enigmatic connection —