We all need a good giggle, and honestly, I laughed out loud when I read this.  It was sent to me by a friend in the UK, and it was told to her by a “Miss Scarlet”.  So, Miss Scarlet, whoever and wherever you might be, thank you. 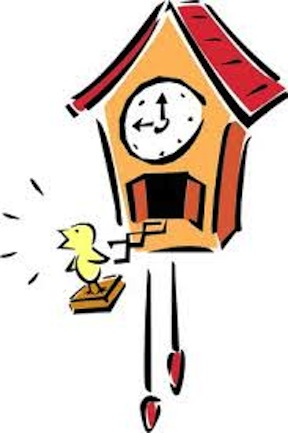 A sub asked her Master if she could go to a lingerie party with the rest of the subs, promising faithfully to be home by midnight.

The hours passed, the lingerie tried, and the gossip exchanged along with many margaritas joyfully consumed.

Creeping through the front door, she was about to walk up the stairs, when, to her horror, the cuckoo clock in the hallway cuckooed three times.

Realizing her Master would be woken up, hear the cuckoo and know how late she was, she cuckooed another nine times. Three cuckoos plus nine cuckoos equals midnight!

Extremely proud of herself (as drunken subs are want to be) for coming up with such a brilliant solution, she snuck up the stairs and slid into bed.

The next morning her Master asked what time she got in.

“Midnight,” she said airily as he moved to their toy cabinet.

“We need a new cuckoo clock,” he remarked.

“We do?” she asked biting her lip.

“Last night,” he began, turning around holding his favorite cane, “our cuckoo clock behaved in a most peculiar manner. It cuckooed three times, then, to my surprise, it spoke.”

“It did? Are you sure,” she quivered.

“Quite sure, but it didn’t end there. It cuckooed twice more, hiccupped, and then tripped over the hall chair and made a very rude noise!”