Yesterday you met Simon the disciplinarian. 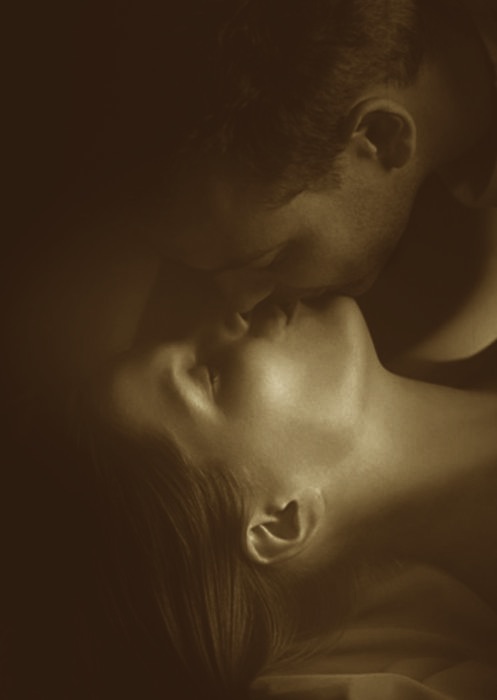 She realized she could no longer hear the shower running, and a new sizzle flashed through her sex.  Straining to listen, she could hear the sound of him toweling off, then silence, then his soft footfalls as he walked towards her.  Moments later she felt him behind her; something was touching her eyes; a mask; a blindfold; something.
“Relax, you’re much too tense,” he whispered, tying the black silk cloth behind her head, blocking out even the faintest hint of light.  “Breathe.  Lean against me and breathe.”
His arms wrapped around her, pulling her backwards, and she released, leaning into him, sucking the air in long deep breaths.
“That’s much better,” he murmured. “You’re feeling weak, aren’t you?”
“Yes,” she stammered.  “How – how did you know?”
“Shhh…it’s my job to know,” he replied, and sweeping her up into his arms, laid her gently on the bed
“Oh thank you,” she mumbled, sinking into the mattress.
“No more talking.  I want you to feel. Just feel.”
She moaned in gratitude, then again with prurient pleasure, as his hands began to move the sensuous fabric across her skin.  Never had she felt such succulence.  Like a thick, slippery liquid, it caressed and covered her, his hands using the luscious material to issue waves of intense sensual sensation, sending her deeper into the mesmerizing erotic state he was creating.
Gently he rolled her over, repeating the magical movement across her back, running his hands over her curves, slithering the mystical material between her legs, barely touching, generating ripples of need.  For how long the ardent attention continued she knew not.  Time had no meaning; there was only him, and the growing heat radiating through her being.
“Tell me how you feel?”
His voice was a low, hoarse whisper, calling her back from the depths.
“I can’t,” she managed.  “Soooo much.”
Simon slithered the slip up and over her round, proud bottom, letting it fall in folds around her waist, and gently pushed her thighs just inches apart.  Picking up the smallest of the crops, he laid the tongue against her swollen sex and began lightly tapping.  She groaned, lifting her pelvis to offer herself, silently begging for more.
Touching the crop on the inside of each thigh, the command was instantly understood and obeyed, her legs spreading themselves wider, opening invitingly.  He continued the tapping, moving from inner thigh to her glistening sex, back to her inner thigh, offering no pattern or potential for anticipating the next tantalizing touch of the spicy leather tip.
The tapping increased, not in speed, but in the intensity of its touch, and her moans grew in kind.  Her hips continued to lift, as though having their own life, searching out their own wanton need, and when her groans of pleasure reached the pitch he found satisfying, he dropped the crop, and taking her by the waist, flipped her over, on to her back.
“Sweet Belle,” he whispered, lowering his head to lay his lips upon hers.
Hungrily her mouth pressed back, then her heavy arms rose, encircling his neck, pulling him urgently into her. He allowed her the moment as her tongue greedily slipped between his teeth, then gently withdrawing, he pushed her head back on the pillows, and moved to the end of the bed near her feet.
The aquamarine toenail polish appeared iridescent in the soft light, and smiling again at her innovative thinking, he lifted a foot and began to caress and massage.  Well-versed in the art of reflexology, Simon was aware of specific pressure points that would enhance her libidinous hunger.  His expert fingers pressed and rubbed, and it was her moans of pleasure through which he gauged the state of her need.  Alternating her feet, he wove his wizardry until she was squirming, unable to stay silent a minute longer.