My first participation in this delightfully decadent blog ‘crawl’.  Just the name, Dungeon Crawl, sends goosebumps dancing across my skin.  In keeping with the dungeon theme, this is an excerpt from the second novel in the British Billionaire Bachelor Trilogy, in which Simon, my luverly Dominant, introduces Belle, his submissive, to his secret dungeon sitting beneath his centuries-old manor house. 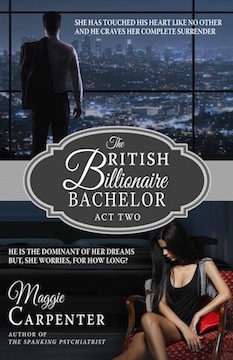 Slowly they made their way down the spiral staircase and through a corridor, ending on the landing she’d climbed to the day before.  Simon pulled the lever on the rock wall, and the door magically swung open, revealing the stairwell to the dungeon.
“After you, my dear,” he declared, ushering her forward.
“Thank you, kind Sir,” she curtsied, and moved on to the second landing, waiting until he closed the hidden opening, then together they descended into the cavernous underground of the manor.
Belle’s stomach danced as she followed him through the entrance by the bed and bookcase. He had said he was going to flog her, and she couldn’t quite identify how she was feeling; her excitement and amatory anticipation was spiced with a healthy dose of fear.  The dungeon was illuminated with honey colored light, and when he wrapped his arm around her waist, nuzzling her neck, she leaned against him, welcoming the support.
“Come along, my lovely, time to prepare you.”
What he meant she couldn’t possibly fathom, but it wasn’t long before she found out.  Standing her next to the bed, he slowly, tenderly, deliberately undressed her, running his fingertips across her skin, tracing circles around her elbows, kissing every part of her as her flesh was exposed.
“Simon, I feel weak,” she mewed.
“I know, my darling,” he breathed.  “That’s why you’re next to the bed, so if you need to sit for a moment you may.”
“I think I do,” she sighed.
Sliding her dress down to lay around her thighs, revealing her nakedness below the hem of the red satin corset, he paused, lowering his head to kiss her belly button, then gently sat her on the mattress.
“Thank you,” she whispered.
He pulled the dress away completely, laying it neatly at the foot of the bed, and sitting next to her, he smoothed his hand across her back, kissed her shoulders, then reaching into his pants pocket, retrieved a black, silk scarf.
“Eyes,” he said simply.
She turned her head, feeling the sensuous fabric slide into place as it stole her sight.
“Comfortable?” he asked, tying it at the back of her head.
“Yes,” she breathed, her heavy anticipation and fluttering butterflies making it difficult to focus.
His arm reached around her, moving her over his lap, allowing her head to rest on the mattress.  She heard him groan as his hand traveled across her backside, the palm of his hand following the swell of her naked cheeks.
“You can make as much noise as you wish,” he offered, “at any time.”
The tender, fondling palm became the bearer of a hot sting, landing smack after smack, crisscrossing her bottom with its message of prurient pain and pleasure.
Every few minutes his hand stopped its spanking, and his fingers slid between her legs, touching and probing, then returned to slap down even harder and faster.  She began to lose her sense of place, time and thought, the spice slicing through her skin, the heat burning through her sex, until finally, gasping and panting, he brought her back up to sit beside him.
“Drink,” he ordered, raising a crystal tumbler to her lips.
She took the glass and gulped the icy water.  It revived her, and she exhaled heavily, leaning her head against his shoulder, then drank some more.  Removing the glass from her hands, he stood her up and guided her slowly to the center of the room, where he lifted her arms, shackling them to chains suspended from the ceiling.
“Oooohhh, Sir,” she moaned.
Standing beside her, he wrapped his fingers in her hair and gently pulled her head back, then lowered his mouth on to hers.  His warm, wet, ardent kiss sent her spiraling back into her carnal hunger, and as his fingers searched her pussy, pinching and touching her sensitive button, she whimpered her words of wanting against his lips.
“Lovely Belle,” he purred, softly rubbing her hot cheeks.  “You’re ready now.”
He softly moved away, walking across to the rack of floggers, and eyeing the selection, chose the one he knew would offer just the right amount of zing without inflicting heavy punishment.  This was not discipline; this was going to deliver her to the ether of subspace, take her to heights only reachable on dark nights like this, when the elements of emotional and physical excess joined together.
Running his fingers through the lush leather tongues, he shook them by the handle, watching them dance in the air.  He would observe her carefully as he whistled them across her skin, keen to every whimper, every moan, calculating the moment when he would release her, and slither his cock through her lusciously wet pussy.

Thank you, my fellow kink devotees.  I hope you enjoyed this little trip to Simon’s lair, and I trust you have time to visit the other dungeons. There is all kinds of mayhem and mischief in which you can indulge. 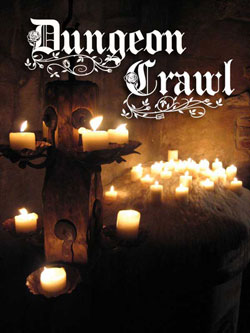