For your racy reading pleasure,

a salacious excerpt from 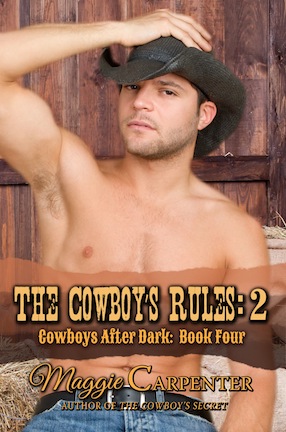 Turning around she moved slowly to the door, placed her fingers around the handle, turned, and pushed it open.

He looked bigger than life; his arms were crossed and his head was titled as he studied her, his black robe draped around him like a vampire’s cape. As his lips curled into a small half-smile, a smile that said, you forgot your place, now I’m going to remind you, her thigh muscles constricted, her seat cheeks tensed, and a flood of moisture oozed between her legs; dropping his arms and locking her eyes he moved towards her.

At such times she was reminded of who Chad Douglas really was; a determined, fearless cowboy, a man who never backed away from a challenge, be it a naughty girl or a bullying tough guy, and a man who had instinctively known who she was and what she needed from the moment they’d met.

All those months ago, standing next to his truck in his aviator glasses, she had felt his quiet, resolute strength; he’d literally taken her breath away. Now, waiting nervously at the side of the bed the same feeling washed over her, and she felt her knees grow weak. She watched, mesmerized, as he reached down and picked up the small tube of lube, squeezing a large drop on the tip of his index finger.

“Wrap yourself around me,” he directed, his voice low and deep. “You know what I want.”

His slow, deliberate training over the early winter months as the fire had blazed, fighting the chill from the icy weather outside their window, had left no room for questions or doubt. Tremulously stepping forward she locked her fingers around his back, rested her head against his chest and separated her feet.

Dropping one arm to her waist he held her tightly as he dropped his other hand to her bottom, slipping his lubed finger inside her crack to search out her most private orifice. Finding the target the finger softly circled, like a shark circling its prey, then touched, pressed, and entered. He could feel her butt muscles constrict and her pelvis thrust against him in an instinctive refusal, her arms fervently clutching him.

“Relax,” he breathed. “I know it’s been a while, girl, but you know I’ll spank that tension right out of you if you don’t. Take a long deep breath and sink into my finger, sink and surrender.”

Cassie had wanted to submit to the probing, prurient visitor, but her negative reaction had been involuntary; she had forgotten how it felt, how utterly overwhelming it was to be taken in such a way.

Inhaling deeply, she held her breath for a moment, then relaxed her muscles as she exhaled, dropping her death grip around his body, letting herself fall limply against his chest, and released the tightness in the muscles of her seat cheeks.

“There you go, much better,” he purred, but as he slowly moved his finger he felt the stress begin to return. “No, girl, no, take that breath again,” he said firmly.

She did as he said, relishing his use of the word girl; he was retraining her, speaking to her as he would a skittish mare, and just like her equine sister she responded to his firm, tender control.

“Much better. Stay still now, I’m gonna do this for a while.”

Fully aware that he would do exactly as he said she rested her weight completely against him, slacking her muscles and calming herself; there was no point fighting the inevitable.

“There you go, that’s my girl, just like that,” he whispered.

Ratcheting up the attention, he gently probed with a steady rhythm, until finally satisfied he withdrew his finger.

“On to the bed now, knees and elbows, legs apart, hands on your cheeks and spread for me.”

The directive sent a fresh hot blush across her face, and lowering her eyes she slowly turned, crawling on to the mattress. Pulling a pillow underneath her head she sucked in the air, reached back, grabbed her cheeks, and stifling a gasp of humiliation she slowly pulled them apart.

Wordlessly he removed his robe, draped it across a nearby chair, and climbed behind her. Picking up a pink, glossy, medium-sized, hard rubber butt plug, he coated it with a generous amount of lube and presented it to her puckered hole.

Cassie squeezed her eyes and clenched her teeth. There was nothing he did that affected her in such a profound way, and as he began to press the large intruder forward she did her best to consciously relax, though the heat of the moment was searing through her.

This was punishment, it was perverse pleasure, it was his gesture of ownership, his complete subjugation of her, and as the bulbous intruder entered she whimpered her groan of surrender.