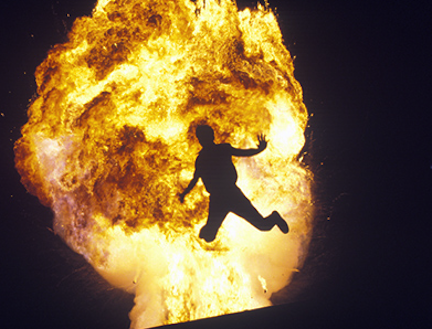 Lifting his head Troy stared back at Bruce Pearson, the assistant director. For two hours they’d been rehearsing, setting up the shot, making sure everything was just right. Troy had to run through a burning room, then hurl himself through a window as a massive explosion erupted behind him. Working with fire didn’t thrill him, and he’d decided to withdraw from anything involving flames at the end of the year.  Much of the shot could have been achieved with special effects, but the Oscar-winning director, Jim Greenwood, wanted the real thing so they’d called in the best, Troy Berenson.

“I need one minute, I’ll be right there.”

He stared at his phone; she’d bailed.

She’s probably been around more broken bones and blood and guts than most people see in a lifetime. If I was a woman I wouldn’t want to date a stuntman either.  Shit, now I’m justifying. I have to let it go.

Bruce sounded stressed. Troy knew everyone was waiting for him but he needed to be completely focused before he did the stunt; it wasn’t a walk in the park and he didn’t want to do it twice. Taking a deep breath he dropped his phone back in his bag and headed to the set.

“Great,” the A.D. declared as Troy marched forward. “Okay, places everyone, we want this in one take so let’s get it right!”

“Remember, five seconds after action, ten seconds for the run.”

He knew the simple direction like he knew his name, but repetition was always welcome. Taking a deep breath he walked through the set and took up his position; his heart began to pump, and he flexed his fingers back and forth.

Seconds later the set was ablaze, and Troy felt his pulse quicken.

He counted to five then began to run, leaping over burning obstacles to the window on the opposite side of the make-believe room. The crack of a beam above his head signaled the jump, and as he leapt through the candy glass window there was a huge boom and a massive flare-up of flames.  It wasn’t a real explosion, but it would appear to be on film. He’d landed on a thick pad on the other side of the window, and he laid still waiting for the all clear, listening to the sound of burning timbers behind him.

Rising from the pad Troy walked over to him, watching the flames being extinguished.

“That was perfect, Troy, perfect,” the director said.

“We’re good!” came the call, indicating there were no issues and the footage was in the can.

“I was thinking about the car crash in the parking lot,” Jim remarked. “Maybe we should flip the car instead of crashing it into a telephone pole. Any thoughts?”

“Doesn’t make any difference to me,” Troy replied, “but a flip is a lot more work to set up.”

“I’ll think about it,” Jim frowned.

“You could have the pole fall on top of the car,” Troy suggested. “You’ll get the drama you want and it won’t cost that much more.”

“Shit, Troy, you’re a genius. That’s exactly what we’ll do.  Have Harry set it in motion.”

Ambling back to his chair he pulled out his phone to call Harry Anderson, his agent, and was shocked to see he had a text…from Belinda; opening it up he couldn’t believe what he read.

Sorry about earlier. Would it be possible to meet at the cafe later today, around 4?

Bewildered but pleased he immediately sent back his acceptance.

“Women, I swear,” he muttered. “I wonder if she’s always so indecisive. I’ll soon spank that out of her.”

Just the thought sent his cock to life, and grinning a Cheshire Cat grin he headed outside to his car, but halfway across the parking lot he saw one of the set designers running towards him carrying her iPad.  Her name was Angela, and Troy had always liked her; she was smart and funny, and knew her stuff.

“Me? What are you talking about?”

“You don’t know, good grief. Look!” she grinned, shoving the tablet at him.

Taking it from her hand he stared at the screen; his image was staring back at him, and above his face he saw the headline: HOLLYWOOD HERO. Risking his life, stuntman Troy Berenson came to the rescue of retired Hollywood Costume Designer, Doris Handleman.

“What the hell, Angela?” he frowned lifting his eyes off the screen and staring at her.

“Don’t ask me,” she laughed. “You’re the hero. It’s all over the place. I’ll bet Harry’s phone will be ringing off the hook for interviews.”

“Shit, Harry, I was supposed to call him,” he muttered, and getting that text totally threw me, whoa, more than I thought it had. Wait…did Belinda see this? Is that why she wants to see me? Am I suddenly more appealing because I’ve just been labeled a hero?