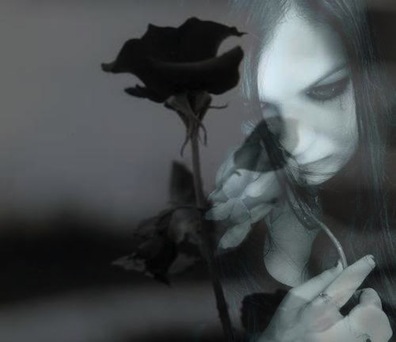 The restaurant was empty, but for the tired bored waitresses, standing like large thirsty plants, limbs dangling, faces dour.

She sat, nervously, waiting for His arrival.

How long had it been?

How many tears had been shed?

How many hours had she relived their sparking, charged, gasping, moments, her fingers dancing across her sex, only to find unutterable emptiness in the wake of her release?

She saw him sauntering toward her, his feet laying tracks in the sawdust on the restaurant floor, and swallowed an overwhelming desire to leap from the table, press her breasts urgently against his chest and rest her head in the crook of his shoulder where she fit so perfectly, inhaling the smell of him.

“How are you?” were his first words as he settled into a chair, too close and too far away.

She smiled, and in an instant her yearning desire transformed into an angry hurt.

What kind of question is that? she wanted to yell at him, whisper at him, ask him coolly, as calm as any lake on a breathless day.

He spoke of nothingness, and she watched his lips move, trying desperately to control the enormity of the emotional swelling of her heart.  She picked up her water-glass, thinking the cold icy liquid would extinguish the burning fire materializing in the back of her throat.

His fingers were playing with a sugar packet, and she recalled how they would roam across her back, traveling down to her round, perfect bottom, where they would rest and caress before lightly slapping, a promise of things to come.

“So?  What do you think?  Do you want to participate?”

How foolish she had been.  What part of her had believed she could sit across from him and not be overwhelmed with the need, the ache, the craving, the urgent hunger.

Participate in what?  What was it he’d been talking about?

“I don’t think so,” she mumbled, silently cursing herself for having stepped back into the energy of his being.

I wouldn’t survive it – not even for a minute – a second.  Whatever it is.

She stared at him.  What had possessed her to jump at his invitation to meet for coffee?

That you can sit here and talk to me, and have no desire to be with me – !  How is that even possible?

“Okay.  Well, thanks for meeting me. You look wonderful by the way,” he grinned, his dimples inviting her to kiss them, then, inevitably, like her tears had trickled, her eyes slid to his incredibly full, moist lips.

She watched him rise from the table, and sat, frozen, as he leaned to kiss her on the cheek.  The full, moist lips brushed her skin.  Closing her eyes for a stinging second, she was transported back in time, leaning against a wall, dressed in a corset, her hands above her head tied in a thick, cotton rope…

‘Take care of yourself,” he whispered, his warm breath in her ear, sending goosebumps scattering across her skin.

“Yep, you too,” she managed, though how she did not know.

Downing the remainder of the water, hoping, praying, begging the Gods to stop her heart from thumping uncontrollably, she watched him leave, following the path of his earlier footfalls laying mute in the sawdust covered floor.

He stepped out into the day, paused, and started to turn, started to move back to her, to pull her out of her chair and envelop her in his arms.

“It’s clear she doesn’t want you old chum,” he murmured to no-one, and sucking in a large bucket of air, strode purposefully to his car.

There are times when she thinks back to that day – that hour – that moment – and wonders.  No, she doesn’t know what thoughts were running through his mind when she him pause, his shoulders rise and fall with the deep intake of breath, but how terrible would it have been for her to swallow her pride and run after him, bare her soul and take the leap of faith?  And if she had…?

Are the unspoken words our roadblocks?  Words held back because of lack of faith, excessive pride and ego, or fear and distrust?  Sometimes it is better to surrender ourselves into the hands of vulnerable honesty, than look back and wonder, what if…