He lived in London.  I lived in Southern California.

It was exciting, glamorous and romantic.  We would meet in exotic cities across Europe and in the US.  Paris, Berlin, London, New York, Washington DC, to name a few.

It was also depressing, frustrating and difficult.

But in the midst of the ups and downs, disappointments and thrills, I experienced what few have.

This story must be told in three parts because there was a beginning, a middle and an end, and each deserve their own post. 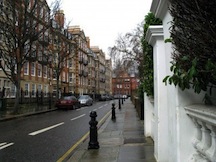 Driving in His sexy BMW Roadster, twisting and turning through endless streets to the outskirts of London, I knew something was afoot.  He had suggested as much in His subtle half smile, and once or twice I caught Him staring at me with a look I could not decipher.

In the center of the room were a number of circular racks each offering something different, but I  remember the contents of only one.  It held nothing but paddles and straps.  Every shape, size, thickness and color.  He placed his arm around my waist and guided me towards it.

A warning bell went off in my head.  I sensed, I knew what was coming but couldn’t quite believe it… 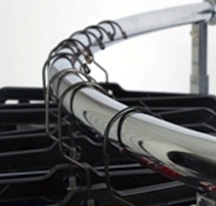 “Place your hands on the chrome pole, please.”

He couldn’t mean to…

“Please don’t make me repeat myself.”

Curling my fingers around the cold polished steel I could feel my pulse hammering in my temples.   My mind flashed back to the morning when He had picked me up at my hotel.  I was in jeans and He had told me to change into a skirt and boots, insisting on thigh highs.  I didn’t think anything of it at the time —  !!

I could hear the high pitched scraping of hangers.

I held my breath.  I felt my skirt lift – the air whispering against the back of upper thighs, my black lace panties exposed for the gaze of any pair of wandering eyes.  My face flushed furiously as I  imagined the burly men across the store, standing behind the counter watching, enjoying, then hoped frantically that they were still there and hadn’t wandered silently over to see the view from another, more intimate angle.

“Let’s try this one shall we?”

– and it hit, the sound sparking through my ears as the sting bit my flesh.  I clenched my teeth and gripped the bar with all my might.  I did not want to yelp – to cry out – to make a sound.

How long… oh God not again?

“No.  The first one I think.  What do you think, Maggie?  The first or second?  Or would you like me to try a third?”

“First,” I stammered, though how I was able to speak I still do not know.

Was I embarrassed?  Mortified? Oh yes!

Was there anywhere in the world I would rather have been?  No, no, no!

Moments later I heard Him talking softly, conversing with the deep voice of, I assumed, one of the men.  I waited.  And waited.  I could hear noises, other people talking, giggling – were they giggling at me?  Standing there, slightly bent over, holding the pole?

“You may open your eyes.”

Relief flooded through me as He put His arms around my shoulders.

“Come with me my sweetheart.”

Next stop – a dressing room.  Inside were three corsets, each a different style.  White, black and purple.  He lovingly helped me try each, accidentally on purpose touching between my legs, brushing a nipple or stroking down my back, until a selection was made.  The purple. 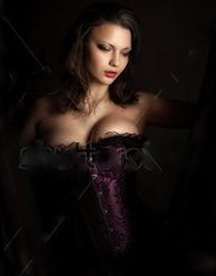 Standing at the counter as He made the purchase I couldn’t stand still.  The heat from the paddles had permeated my sex and my being was itchy for attention.  Mr. Muscle caught my eye and a brand new scarlet flush traveled up my neck and across my face.