How Much Clearer Can It Be Said?

I Need You To Need Me is a wonderful blog by a dear lady who is finding her way through the submissive journey.  The beginning of one of her recent posts began with this opening line:

First – when I’m faced with such questions I remind myself that it’s impossible to explain to a vanilla person the tremendous pleasure and joy we derive from our surrender.  If they’re not hard wired as we are, it doesn’t matter what you say, or how you try to explain yourself, they simply will not be able to comprehend your message.

And second – in a sane, loving D/s relationship, a submissive has a safe word.  Period.  If something becomes too much, if she is uncomfortable or frightened there is an exit door. 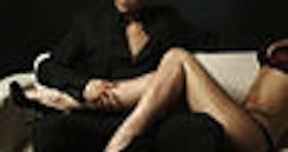 Being a submissive is not a choice.  At least it’s not a choice for me.  It’s who I am.  A vanilla relationship would be wholly unsatisfying, frustrating and boring.  (Been there, done that!)   There would be no point and it would be doomed before it began.  I would be denying myself that which I need to be truly happy.

I sometimes wonder if we Dominants and submissives have actually been caught in some kind of time warp.  In the 40’s and 50’s D/s was the natural order of things, it just wasn’t labeled as such.  Think of Ricky and Lucy – there’s a D/s relationship if there ever was one.  Simon Templer, the fabulous Saint, talked about it often, and I was watching an old episode of Perry Mason recently, during which a husband spanked his wife.  No worries there!  She caused a scene at a party and he dealt with it.

On July 20, I posted a blog entitled:

And September 28 I posted another entitled:

At the end of the day we must be true to ourselves.  We must follow our path and seek the joy and happiness that is ours to cherish.  We don’t have to justify who we are or answer questions from those who can never understand what it is that compels us to live our lifestyle.

As The Fading Romantic Dominant often states – Life Is Not A Rehearsal.