Welcome to the decadent delights of the Dungeon Crawl Blog Hop. Pasted below is an excerpt from my latest release,

THE COWBOY FROM DOWN UNDER 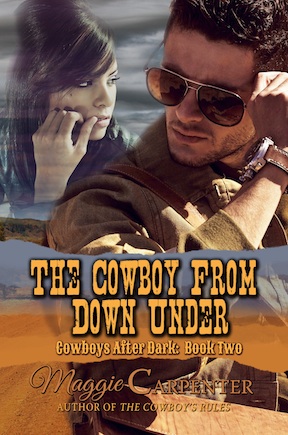 Emma Harrison, a strong-willed, daredevil photographer, is in Australia to shoot some thrilling photographs for a new coffee table book.  Derrick Palmer has been assigned the task of keeping her safe in the dangerous New South Wales outback, a task he takes very seriously. In this excerpt, their relationship has developed, and Dominant cowboy Derrick wants to see just how submissive Emma Harrison, the supposedly tough and determined, woman, truly is.

He watched her for a minute, then a wry smile crept across his lips.

“I have an idea that might help take your mind off things,” he murmured.

What he had in store was a roll of the dice, but he wanted to see how she would handle it, and it would be a true test of her submissive nature.

“You’ve got a glint in your eye,” she remarked.

“I’m not surprised,” he chuckled. “What’s under that robe?”

“Nothing,” she replied, tilting her head to one side. “Why?’

He didn’t respond, but walked to a chest of drawers retrieving two long pieces of wide ribbon. Emma’s stomach did a tap dance as he moved slowly towards her, and when his hands undid the belt of her robe, then traveled up to her shoulders to push the sleeves down her arms, letting the robe drop to the floor, a warm shiver sent goosebumps dancing across her skin.

“You’re not cold are you?” he asked softly.

“Yes,” she breathed, “apprehensive, and I feel weird standing here naked like this.”

“You’re gorgeous, you have nothing to feel weird about, but apprehensive I can understand.”

“What are you going to do with those ribbons?” she muttered.

“I told you, I’m going to give you something to think about,” he smiled, quickly tying one around her waist.

“I don’t understand,” she frowned.

“You will in a minute,” he promised.

Knotting the second ribbon to the center of the one he’d tied around her midriff, he carried it between her legs, nestling it into her sex, but as he reached around, tugging on it to move it between her bottom cheeks, she let out a gasp and began squirming. Quick as a flash he landed his hot palm against her backside, swatting her smartly several times in succession.

“See that you are,” he said sternly, landing two more smacks on each cheek for good measure. “You need some training.”

“Training?” she squeaked. “What do you mean?”

“Haven’t you ever had a Dom?” he frowned.

“Um, kind of,” she replied, thinking about Marcus. I guess he wasn’t, not really. It sure didn’t feel like this.

“We’ll talk about this later. Please stand still and let me finish.”

“Sorry,” she apologized, and to show she would cooperate she shifted her feet apart.

“That’s better,” he remarked, and picking up the trailing ribbon he yanked it between her cheeks and tied it off, then turned her around to face him. Her eyes were sparking, and her face was as scarlet as her freshly spanked bottom.

“Do I have to wear this all night?”

“Only if you want to, but it would please me,” he replied softly, his stern demeanor vanishing as quickly as it had surfaced.

“When you figure it out you tell me,” he said, and taking her face in his hands, he kissed her warmly. “Now get dressed and we’ll go.”