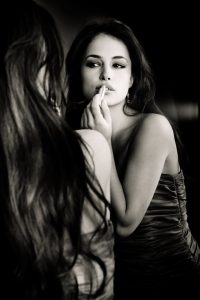 How could she possibly be ready in three minutes?

That was the look she’d offered when he’d given his instruction. Innocent. Disbelieving.

She had silently lied.

Anticipating him, she had arrived already dressed, her corset deliciously clutching her body beneath her clothes. All she needed to do was change her stockings, freshen her makeup, and add the jewelry. Naturally she planned to take the whole three minutes, and even add a few seconds for good measure.

She smiled mischievously as she casually slipped the stocking tops into the garters. There was plenty of time.

Would she confess her sins?

The question idly floated through her head. If he didn’t sense she was hiding something and question her, no doubt, at some point, her conscience would force her to kneel before him, and with pleading eyes she would softly murmur her wickedness.

Probably. It was in her, but for how long could she keep her secret? A naughty smile crossed her lips. It might be interesting to find out.

Moving to the bathroom, she applied the glossy red lipstick, then giggled, delighted at her deception. It felt good to get the better of him – sort of. He was usually one step ahead, but not this night. Nope! Not this night. Nor would he be if she kept her nerve.

It wasn’t her first walk on the naughty side, and he’d caught her each and every time. Truth be told, she always felt a sense of satisfaction when the gig was up and she was over his knee, or laced in rope contemplating her impish ways.

Checking her watch she saw she had forty-five seconds left, fifty-five if she added in the extra ten, then decided to play it safe and make it thirty.

Oh, how she loved the game.

Checking her appearance, she decided to leave off the jewelry. She’d much rather there be no obstacles when it came time for him to place the collar around her neck. The thought of it sent the familiar flutter through her stomach. She took a breath, but it did nothing to relieve the delicious butterfly dance, and briefly closing her eyes, relishing the exquisite feeling, she turned and moved back into the bedroom.

Her eyes fell back to her watch. It was time. Pushing open the door, she didn’t drop her eyes like the good little subbie she claimed to be, pretended to be, wanted to be. She stared right at him, engaging him, daring him to see her sins.

He smiled, but it was accompanied by, the look, the one that said, don’t push your luck, young lady. There was no thought when her gaze dropped to the floor, and as her heels clipped their way towards him on his hardwood floors, her heart began to pound.

She was in front of him, standing, and his fingertips brushed the insides of her thighs. They were wet. A scintillating shiver shuddered through her body.