Speaking of paranormal, isn’t this a coincidence?

THE WARRIOR AND THE MISCHIEVOUS WITCH 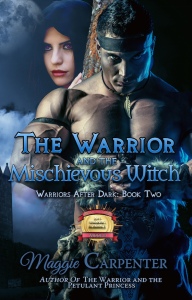 Angelica, a carefree, playful young witch, is returning to her cottage in the woods when she detects the presence of a powerful man. A Warrior of the First Order, Darius Dunworthy, has been sent by the Prince of Zanderone to find her. There is an evil menace terrifying the citizens, and the Prince believes the talented witch can help.

Though shocked by his discipline and his list of rules, she is even more shocked that he doesn’t fear her, and when she learns they will be guests of Princess Lizbett and Lord Larian, she is determined to travel with him.

Has Angelica met her match in the mighty warrior? Will Darius be able to control the willful young witch? When they meet up with Lord Larian and Princess Lizbett, what mischief will Angelica get up to? Will the petulant Princess Lizbett be caught up in Angelica’s playful naughtiness?

NOTE: Written as a stand-alone book, this is a sequel to The Warrior and the Petulant Princess.

“You will just rest there for a moment, and feel the pain of my punishment.”

“Please, will you rub it?” she bleated.

She could have muttered an incantation as he’d pulled her off her mare and thrown her over his shoulder, or stopped herself from feeling the sting and faked her way through the entire spanking, but she hadn’t able to bring herself to do it, and with the hot seat spell bouncing back at her, she wasn’t sure if it would have worked anyway.

What’s the matter with me? I need to speak to Aunt Namia. I hope she can give me some answers.

The unexpected, soothing caress of his hand elicited a deep sigh, and longing for his touch she spread her legs.

“You’re asking me to touch you,” he mumbled. “I’m not sure you deserve it, and if your pussy is as sharp as your tongue it might well give me a nasty cut.”

Thanks for stopping by, and I wish you a spooky, spanky, ethereal, paranormal weekend.