Below is my latest release, a Victorian Spanking Romance. 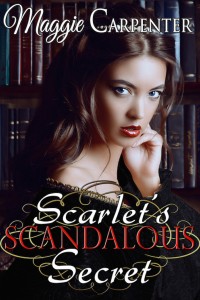 Though they were once inseparable, nineteen-year-old Scarlet Fairfax has spurned Richard Portman’s friendship since the fateful day when he took her in hand—and over his knee—in an effort to protect her virtue from the unwholesome attentions of a rakish foreign prince. But now, as she faces the potential ruin of both her own reputation and that of her family, Scarlet realizes Richard may be the only man who can rescue her.

When he receives a letter from Scarlet begging for his help, Richard doesn’t let the wounds of the past prevent him from rushing to the aid of the girl he loves. He can forgive her for storming out all those months ago and vowing never to speak to him again, but saving her reputation will require drastic action. He must marry her, and with haste.

Scarlet is both shocked and thrilled by Richard’s proposal, and when he makes it clear he will demand obedience from his bride it merely sets her heart racing faster, but it isn’t long before her penchant for defiance earns her a thorough punishment applied to her bare bottom. Yet despite her sore backside, the painful chastisement leaves Scarlet deeply aroused and aching for Richard to claim her properly.

But when the dishonorable rogue who caused all the trouble in the first place returns to London threatening to create further havoc, Richard will have to act quickly to avoid disaster. Will his bold plan succeed, or will Scarlet’s scandalous secret prove her undoing after all?

“Lay yourself over the arm of the couch, and take the cushion and bury your head. I intend to lift your skirt and petticoats, and this time, I shall bare your bottom.”

“Do you not think your behaviour warrants it?”