Thrilled to announce the publication of
Scarlet’s Scandalous Secret 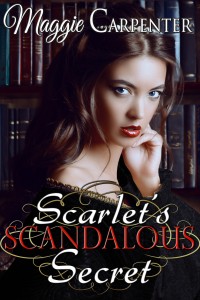 Though they were once inseparable, nineteen-year-old Scarlet Fairfax has spurned Richard Portman’s friendship since the fateful day when he took her in hand—and over his knee—in an effort to protect her virtue from the unwholesome attentions of a rakish foreign prince. But now, as she faces the potential ruin of both her own reputation and that of her family, Scarlet realizes Richard may be the only man who can rescue her.

When he receives a letter from Scarlet begging for his help, Richard doesn’t let the wounds of the past prevent him from rushing to the aid of the girl he loves. He can forgive her for storming out all those months ago and vowing never to speak to him again, but saving her reputation will require drastic action. He must marry her, and with haste.

Scarlet is both shocked and thrilled by Richard’s proposal, and when he makes it clear he will demand obedience from his bride it merely sets her heart racing faster, but it isn’t long before her penchant for defiance earns her a thorough punishment applied to her bare bottom. Yet despite her sore backside, the painful chastisement leaves Scarlet deeply aroused and aching for Richard to claim her properly.

But when the dishonorable rogue who caused all the trouble in the first place returns to London threatening to create further havoc, Richard will have to act quickly to avoid disaster. Will his bold plan succeed, or will Scarlet’s scandalous secret prove her undoing after all?

He stared into her eyes for just a moment before lowering his lips on hers, and as he began to kiss her, he brought his hand to her breasts, moulding the soft plump flesh.

“They are lovely,” he whispered, raising his head. “Am I the first to fondle them?”

“You are, and it’s wonderful,” she moaned, trying to focus on his infinite black eyes. “Like nothing I’ve ever felt before.”

“What of the special place between your legs?” he asked, tenderly kissing her neck. “Has that been explored?”

“Open your legs for me, Scarlet. Open them and let me see.”

Somewhere in her brain she knew it wasn’t a good idea, but she was feeling so malleable, almost as if it would be wrong to refuse.

“You are unsure? I am so disappointed,” he said sadly. “You have hurt me deeply.”

“Nervous? Oh, that is different, that I understand,” he cooed, moving his kisses across her face. “Nervous is very good, it means you are excited. You are excited, aren’t you?”

“I am, but I also feel so strange, sort of dreamy.”

“I promise, everything I do will feel very splendid,” he purred, moving his hand to caress her thigh over her dress. “Do you like my hand on your leg like this?”

Her heart was beating in a strange pattern, and it was thumping hard against her chest, as though it might pop right through her ribs. The voice in her head was continuing to tell her she must reject his amorous advances, but it was growing fainter with every passing second, and he was so confident and so deliciously different, it was becoming increasingly difficult to listen.

“I’m going to pull up your skirt now,” he whispered. “See, nothing terrible has happened, and look at your lovely drawers under all these many petticoats. Aah, the inside of your thighs, such a sensitive area,” he continued, “and you must not worry, my lovely English rose, you feel funny because that is how you are supposed to feel.”