“Your eyes betray you, the beautiful blush that pinks your cheeks betrays you, the rising and falling of your breasts betray you.” 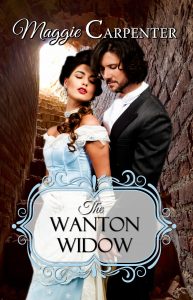 Crackling lightening and booming thunder roars through the moonless sky. Lady Verity James, a widow who shuns society’s rules, is in her lavishly decorated boudoir with one of her lovers. There is a gentle knock on her door, and to her astonishment, her austere butler announces the arrival of a foreign stranger.

Drenched to the skin, Dantae Fellini claims to be the secretary to an Italian Count, Rocco Cavaletti. Their carriage crashed, and the count has sent him into the torrential rain to seek help. She quickly learns, however, that the carriage accident was no accident at all, but caused by sabotage.

Who are these mysterious strangers now sheltering in her home? Count Cavaletti appears ill-at-ease, but his secretary, with his long dark hair and blazing blue eyes, makes her pulse race and her face redden.

Suddenly her life is turned upside down. She finds herself swept away in an unstoppable romance, and as events unfold, she learns of hidden corridors in her centuries-old manor house. Surrounded by danger, with an evil assassin on the loose, what purpose might they serve?

More importantly, who is Count Rocco Cavaletti? And what power does his seductive, deliciously decadent, dominant secretary have over her?

Upstairs in the Hampton Suite, the man who called himself Dantae Fellini, was laying on his bed, a lamp on the bedside table set to its lowest flame. His head was filled with many thoughts, but he had the ability to place them in separate compartments. It was a method taught him by a great scholar, and through the years it had served him well. He could easily recall names, places and facts, and sort through situations and circumstances in a logical, calm, methodical manner.

Tonight, however, the beautiful Lady Verity James had opened and slammed the doors inside his head, and he simply didn’t know where to put her. He had placed her in his immediate needs cabinet, someone to be humored and amused and kept on his side, but standing next to her as Lambert had poured the champagne, and later, sitting near her at the dinner table, had stirred in him something unfamiliar. It had felt almost cavernous, like a swimming hole one could sense was deep, but perhaps deeper than one could fathom.

And there was something else. Something he could not deny; his need to take control of her, to tame her wild side, to lay her over his lap, bare her bottom, and spank her with gusto.

The temptation to do just that when she’d begun to throw her tantrum had surged through his body, and when he’d clutched her wrist as she’d been storming from the room, the craving had been almost impossible to endure. She’d been so full of challenge and passion, so determined to show him how powerful she was, how smart, how brave, how tempestuous.

But he’d wanted to do so much more than spank her.

He’d wanted to kiss her too, kiss her and consume her. He’d wanted to bend her over the sofa and thrust his throbbing member into her depths and pound her with abandon.

He’d wanted to do all those things, and he’d done none of them. He couldn’t have, of course, not without her willing submission, and even had she been so inclined, which he was convinced she would have been, he was on a mission to save a most important life, and avoid the murderous villains who were trying to stop him. He could not allow himself to become distracted, and more importantly, he could not put her in danger.