I AM THRILLED TO PRESENT 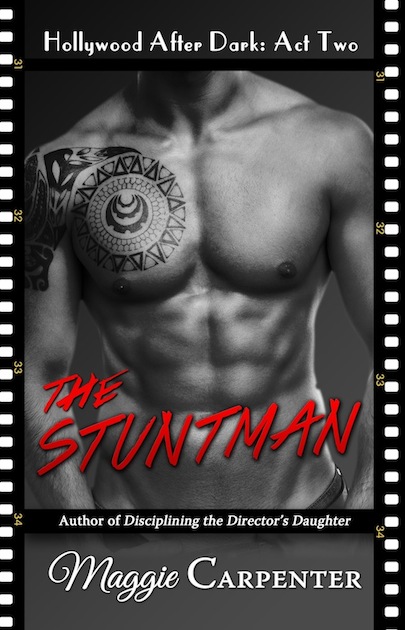 Such a joy to write this book, and I had no idea when it began it would end up being 80,000 words. Below is an excerpt I hope you’ll enjoy, and a link to the book trailer.

I must also note that this was my first foray into formatting, and though the book looked marvelous on the Kindle previewer, it does not look so marvelous on the Amazon site. I am working to fix this, so I hope you will forgive the technical issues. 🙂

Thank you for stopping by.

Though she has been in a relationship with a Dominant more than once, Belinda has learned the term, Dominant, is a label often misleading, and she aches for the real thing; a man who is comfortable in his own skin and won’t hesitate to take her in hand. When Blake Berenson comes into her life, she believes her prayers have been answered.

When Blake tells her he is a stuntman her heart sinks. Having been a nurse in a trauma center for several years, the sight of broken bones and bloody injuries is becoming too much, but in spite of her misgivings, the spark between them fiercely crackles, and she quickly finds herself over Blake’s knee. He is everything she has dreamed of, and she falls hard for the handsome daredevil.

One night she takes care of famous screenwriter who has been in a major car accident. When his private secretary, a stern, officious man, asks her to be the patient’s private nurse she is tempted to accept, but Blake, having heard disturbing rumors about the writer and his palatial mansion in the hills above Malibu, is firmly against it.

Will Belinda defy Blake, the Dominant she’s crazy about who doesn’t hesitate to spank her when he thinks she needs it, who fills her nights with blindfolds and salacious play, taking her to spine-tingling heights of passion? Will she risk all she has with her hunky, amorous stuntman for a stranger? And what about Blake? Will he put his foot down, or will he use his strength, his cunning and his special skills to help her?

With the security of his firm grasp guiding her, she moved forward until he pulled her to a stop. Taking hold of her hands he raised them up, cuffed her wrists, then lifted them higher, placing her fingers around the post of his bed. Seconds later she heard the sound of a metal clasp, and she realized she was shackled and unable to lower her arms.

Something touched her back. It was cool, and small, and slowly traced her spine downwards until it was moving over her seat, then it began to slowly tap.

Blake was holding a long, thin crop with a wide leather tongue. Never having seen one quite like it he’d bought it immediately. He’d been on location in New Mexico, working in a small, country town, and the horse supply store had spiked his curiosity. The crop hadn’t been his only purchase. He’d also bought a thick, sheepskin mitt, a lead line made of the softest rope he’d ever glided through his palm, and a cowboy hat. The young sales girl had flirted with him shamelessly, and he’d wanted to lean over the counter and christen the crop on her backside for being so obvious.

Holding the crop in his hand, knowing he was about to christen it, he felt a crackle of excitement. New implements charged him up, and sharing one with Belinda made the moment even more delightful.

As he landed the first light but stinging swat, his cock surged to life, and he stared for a moment at the small, almost square stain. It was bright pink, and repeating the sharp slap of the tongue on the opposite cheek, he smiled with satisfaction as the color bloomed a second time.

Moving around her, stepping from side to side, he danced the leather swatch across her cheeks, never landing it on the space spot twice, and covering her bottom with a range of satisfying blotches. She had squirmed and wriggled during the moderate cropping, and gladdened by his handiwork he sidled up to her, tenderly fondling her hot seat before slipping his fingers into her sex.

“Wet, wet, wet,” he purred in her ear. “Nothing to say? No smart retort? Oh, that’s right, you have a beautiful silver ball in your mouth. Pay attention, Belinda. I have attached your wrists to a swivel snap, and I’m going to turn you around. I think your tits might be feeling neglected.”

She managed a moan, and placing the crop on the bed he grasped her waist and slowly rotated her body so her back was against the post.

“You didn’t think that would work, did you? I’m a stuntman, remember? I know all about ropes and knots. I know about all kinds of things.”

His comment elicited another muffled muttering, and taking a moment to step back and study her, he smiled at the glorious sight. Her face was flushed, her chest was rising and falling, and her skin was still displaying a delightful array of goosebumps.

“You are ravishing,” he muttered, his voice low and deep and husky.

Stepping close, he lowered his lips to her sharp nipples, sucking hungrily, then picking up the crop he rested it against her right breast.

“Have you ever felt the sting of a crop on your lovely tits?”

She shook her head, urgently moving it back and forth.

“I didn’t think so,” he murmured. “Don’t worry, since this is your first time I’ll be somewhat lenient. If it becomes too much stamp your foot twice. If you understand, nod your head.”

Her head bobbed up and down, and watching her, he unexpectedly had an image of her kneeling before him and sucking his cock.

Focusing back on the task at hand, he started to tap the leather swatch against her nipples. It wasn’t the severity of his soft smacks that created the sting, but the repetition, and when he sensed her reaching her limit he moved the crop from breast to breast, frolicking it across the full, fleshy mounds.

Her breathing was becoming heavier, her muffled moans were more frequent, and dropping the crop back on the bed he reached behind her and unfastened the gag, slowly sliding it from her mouth.

“Don’t speak,” he whispered placing his thumb against her lips, “suck.”

She took a moment to catch her breath before drawing his thumb into her mouth, but when she did, he moved his other hand between her legs to tease and rub. She groaned as her ache grew, and when he began kissing her neck she let out a heavy moan.

“You’re going to suck my cock just like you’re sucking my thumb,” he whispered. “I’m going to release you, and you’re going to be a very good girl and kneel down exactly where you are.”

He dropped his hand away from her pussy, and as he carefully pulled his thumb from her mouth she chased it with her tongue.

“That’s what I like to see,” he breathed as he untied her. “I’m going to keep your wrists locked together. I haven’t finished warming your backside.”

She whimpered at the news, but with his hands on her shoulders offering gentle pressure she lowered herself to her knees, then searched in the darkness of her blindfold to find him.