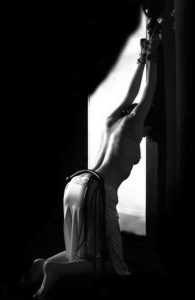 His fingers were exploring her pussy, and with his murmured words sending a fresh wave of carnal heat through her body, she tried to wriggle against his touch, but his hand dropped away.

He was going to start!

Had he just told her to hold her breath, or had she dreamt it? She didn’t know, but hissed in the air. The floor creaked behind her. He was moving…slowly…positioning himself.

She was ready, but she was not ready, not for the hot tongues that caressed her cheeks with a heavy, stinging thud. She heard herself cry, her thighs tensed, but a moment later she found herself thrusting back her hips.

It had been a silent plea, but the more was delivered. Iridescent pinpricks surged through her being. How many lashes? Three? Four? They melded into one as her soft moans echoed through the small room.

He was suddenly beside her.

Time to check your wetness.

Hmmm, not yet wet enough.

Yet wet? Did he just say that? Not yet wet—

Do nothing. I will lower them!

No resistance, no thought, just a warm, soft melting into his cradling hold. Carried, lowered on to the bed, the delicious thrusting, his powerful cock, the weight of his body, she rose higher, and higher, sure she would not survive the looming explosion…it fired…a thousand tiny buzzing flashing lights…she was floating.

Come back, easy, come back down.

Why? This is the most glorious place. Such peace, such sweet serenity. Why would she come back? She was touching beauty.

But she did. And she was forever changed. 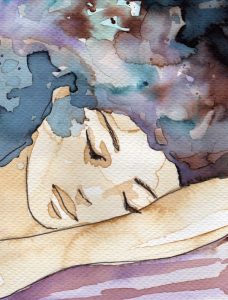