I’m so excited about this book. It was written during a tumultuous time, and was not just a place to which I could escape, but the dramas unfolding around me revealed a darker side I didn’t know I had.

Tucker is not just a romantic, take-charge cowboy, he’s a tough, no-holds barred man who will fight his enemies with whatever it takes to defeat them. His gun. his fists, any weapon at hand…and his brilliant cunning. 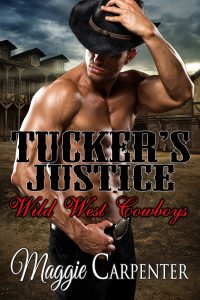 When hardened gunslinger Tucker Prescott is tasked with bringing law and order back to a town overrun by a gang of criminals, he quickly realizes that his biggest challenge won’t be the villainous McGill brothers. The one who will truly put him to the test is Dolly Baker, the beautiful, feisty twenty-two-year-old daughter of the man who hired him.

From the moment she barges into his cabin uninvited, Tucker knows Dolly is going to be trouble, and it isn’t long before she tests his patience one time too many and earns herself a sound spanking. The embarrassing chastisement gets her attention, but it will take quite a bit more than a few smacks on the bottom to teach her obedience, and the more he sees of Dolly, the more Tucker is forced to admit that he would love to be the man to properly tame her.

Tucker didn’t come to Spring Junction to keep a woman in line, however, he came to deal with the McGill brothers and their gang. He has a plan to do just that, but it will depend on his quick wits as much as his quick draw, and despite his best efforts Tucker can’t get Dolly off his mind. Can he bring the outlaws to justice and make her his bride before she drives him to distraction?

Sensing eyes on her, Dolly turned her head; she was too late. Tucker was next to her horse and launching himself up. In a flash he was sitting behind her and his arms were around her body, his hands jerking the reins from hers; it had happened in seconds.

“Tucker, please, I can explain,” she protested as he turned the horse around.

“Not interested,” he declared, lowering his lips to her ear. “Save your breath, you’re gonna need it.”

Though he wished he could gallop out-of-town, the last thing he wanted was to draw attention, so he pushed the mare into an easy trot, keeping an even pace until he’d reached the end of the street, then he moved the mare into a canter. It was a short ride to the cabin, but he continued on to the barn. Jumping off, he opened the doors and led the horse inside, where a worried Dolly slid from the saddle, a chill shivering through her as she stared into Tucker’s angry eyes.

“Hobble your lip, girl,” he snapped, throwing her the reins.

Stepping to a nearby post, he lifted a lantern off its hook, and grateful the striking sticks were in a bag next to it, he lit the wick.

His voice had been harsh, and she stood silently watching as he closed the barn door, then pulled off the horse’s saddle. As he took back the reins and led her horse into a large closed-off area filled with straw, she searched her mind, hoping to find the words that might appease him.

“If you’re wonderin’ why I brought us in here,” he said, throwing her mare some hay, “it’s because it’s likely I’m gonna have some uninvited guests. If they show up I’m hopin’ they’ll head on back to town when they find the place empty, but if they take it into their heads to check out this barn, we’re hiding under the straw behind your horse. Got it?”

“I don’t understand,” she frowned. “Why would anyone come here?”

“’Cos there was trouble tonight, and Patty McGill might wanna see if your father has a guest in his empty cabin, that’s why.”

“What sort of trouble?”

“That can wait until after I spank your ass.”

“I made it real clear! Stay away from here and from the town!” Tucker exclaimed, suddenly lunging forward and grabbing her wrist. “You’re gonna learn to listen to me!”

“There ain’t nothin’ you can say that’ll get you outta this,” he said gruffly. “Sometimes I shoot first, and tonight I’m gonna spank first, then you can do your explainin’.”

He didn’t respond. Dragging her across the barn to a bale of hay, he dropped down and yanked her across his lap, but to his dismay he discovered her skirt wasn’t a regular skirt; it was a split skirt.

“Damn it to hell,” he cursed, “you’re lucky we’re not outside. I’d find myself a real hard stick to spank you over these pants you’re wearin’.”

“Please, let me go, you don’t understand,” she begged, trying to squirm away. “Just let me explain.”

“You can explain after I whack your butt,” he barked, placing his leg over the backs of hers. “Right now I’m gonna spank you good, and next time you think about goin’ against what I say, maybe you’ll think twice.”

She continued to protest, but raising his hand, he brought it down with a strong smack, immediately following it with another, and then another, rapidly moving his flattened palm from cheek to cheek. Her yowl of pain told him her split skirt wasn’t providing as much protection he’d thought it might, and he continued to land his hot hand with slap after slap, covering every inch of her backside. Her yelps and howls grew louder, and increasing the force and tempo, he delivered a flurry of strong, stinging smacks to the center of her bottom.

“Owww, owww, please,” she wailed. “No more! My bottom is burning!”
He believed her. The spanking had been forceful, and though covered with material, he had no doubt her bottom was on fire.

She’d been fervently wriggling, so he paused to let her catch her breath, planning on finishing with several more hard swats as he scolded her, but the sound of horses’ hooves snatched his attention.

“Dagnabbit,” he muttered, pulling away his leg. “Get up and go join your mare.”

Grabbing her bottom, rubbing it and whimpering as she hurried away, she climbed through the planks of wood rather than open the gate, and moving around her horse to the corner, she gingerly slid down.