THE COWBOY AND THE GIRL IN THE HOT PINK CHAPS 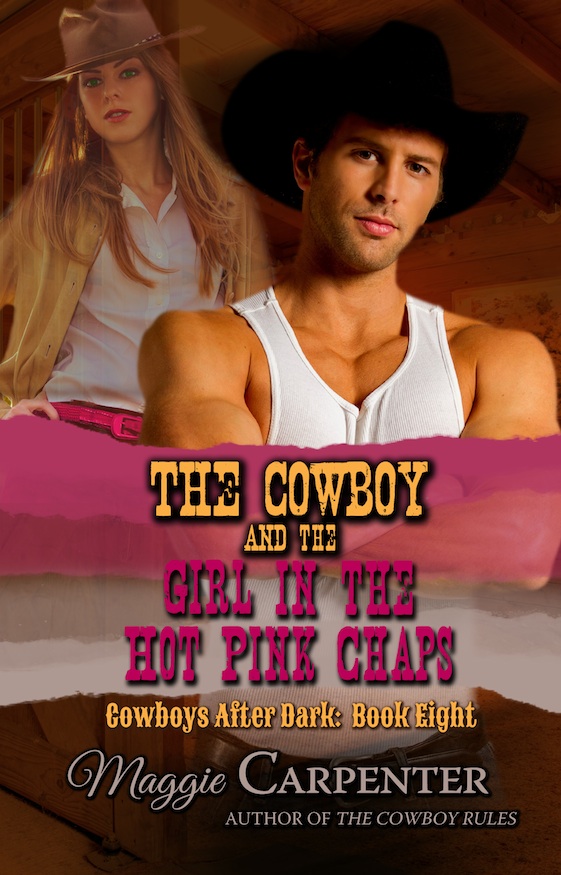 I’m very excited to announce Book Eight of this series, a super hot, titillating tale,  with all the sizzle you can expect between a cool hunky cowboy and a sexy sassy siren.

Dot Anderson has been in crush with Matthew Montgomery since she was a skinny, awkward teenager saddled with braces, thick glasses, and short, mousey brown hair.  Hanging around the cafe where he’d stop for coffee, she would pet his dog, Jinx, just to be near him. Time passes, and with her college years behind her, the ugly duckling has blossomed into a swan. Dot becomes Dusty, and with a rare talent for barrel racing, she makes her mark in local shows.  When she bumps into Matt Montgomery after winning the divisional finals, her feelings for him haven’t changed, but to her shock and fury, he doesn’t remember her.

I knew it. I knew he wouldn’t remember me. All those times I said hello, all those times I gave Jinx treats and made such a fuss of him, was I completely invisible? I shouldn’t be so angry, I know I looked completely different back then, but I can’t help it. This was such a great win. I should be ecstatic. Licorice and my riding, that’s all I should be thinking about. Okay, that’s it, I’m fine. I’m done with this crap. I have to go and show Auntie Sharon my trophy. Screw him, screw them all.

Squaring her shoulders and taking a deep breath, she opened the door and headed off towards the barn. Being with Licorice, grooming him, making sure he was okay, that would calm her, then she’d go to the trailer and see her aunt.

Her gaze had been on nothing. She’d simply been putting one foot in front of the other, and hadn’t spotted Matt leaning against the wall ahead, Jinx at his side.

“Sorry, what?” she frowned looking towards the voice. Matt? No! Seriously? Not again! Please, dear God!

“Hi,” he smiled. “I just wondered if you’d like to have some coffee, or maybe lunch sometime?”

“You can’t be serious?” she glowered.

“Uh, have I offended you?” Matt asked, completely baffled by her reaction.

“Offended me? You’re asking if you’ve offended me?”

“Easy there,” he said lifting his palm in a gesture of surrender as he slowly moved towards her. “If I have, please tell me. Let me make it up to you.”

A bubble began in her gut and moved slowly upwards, gaining power and strength as it traveled. All her years of adoring him from afar, of being the odd one, having no boyfriends or dates, suddenly exploded in a torrent of emotion.

Out of breath, out of words, and completely overcome, she made a loud grunting noise and hurried away.

“What the hell was that?” Matt muttered.

Jinx, who had been sitting patiently by his side, was not going let his long-lost friend leave without a goodbye, and unexpectedly bounded after her.

Matt was about to chase after them both, but he paused, slightly shell-shocked.

That was totally bizarre. I should just call Jinx back and let her go. I should, but I don’t think I will. Whatever her problem is, that was totally out of line, and I need to find out what the hell is goin’ on.

Breaking into a jog he managed to catch up to her just as she exited the building, Jinx following along behind.

To his relief she stopped, then slowly turned around.

“I don’t know what I’ve done to upset you, but that temper tantrum-”

“Temper tantrum?” she interrupted glowering at him. “How dare you. Just because you’re a good-looking guy with a fancy truck and money to burn, you think I should be all googly-eyed that you want to go out with me?”

“Googly-eyed?” he exclaimed. “What the heck are you sayin’?”

Jinx, upset that they were raising their voices began to bark, and bending down to pet him, she laid her trophy on the grass.

“Jinxy, don’t worry sweetie,” she said affectionately. “You just have a thoughtless human for an owner.”

“What is wrong with you?” Matt frowned totally bewildered.

“There’s something wrong with me now?” she shrilled jumping to her feet, fighting the tears that threatened to burst at any moment. “There’s nothing wrong with me. I just don’t give a shit about all your money, and if I go out with someone it will because they’re genuinely interested in me, and I know they want to spend time with me because of who I am, not how I look.”

They were suddenly locked, eye to eye, two wild beasts in a standoff.

“You know what you need?” he said quietly, leaning forward, a deep furrow carving his forehead. “You need an old-fashioned, over the knee spankin’.”

“What did you just say?”

“You heard me. You’re upset about somethin’, okay, but damn, girl, the least you can do is tell me what it is. That was nothin’ but a childish outburst.”

“You know what,” she hissed, knowing in one more second she’d dissolve into tears, “maybe you’re right, maybe that was a tantrum, and maybe I do need a spanking, but it sure as hell won’t come from the likes of you.”

Dumbfounded, he watched her pick up her trophy and storm off.

I hope you enjoyed this little peek into the book, and I thank you for taking the time to read. Listed below are the other participants in this weeks hop, and I know they would love to have you visit.